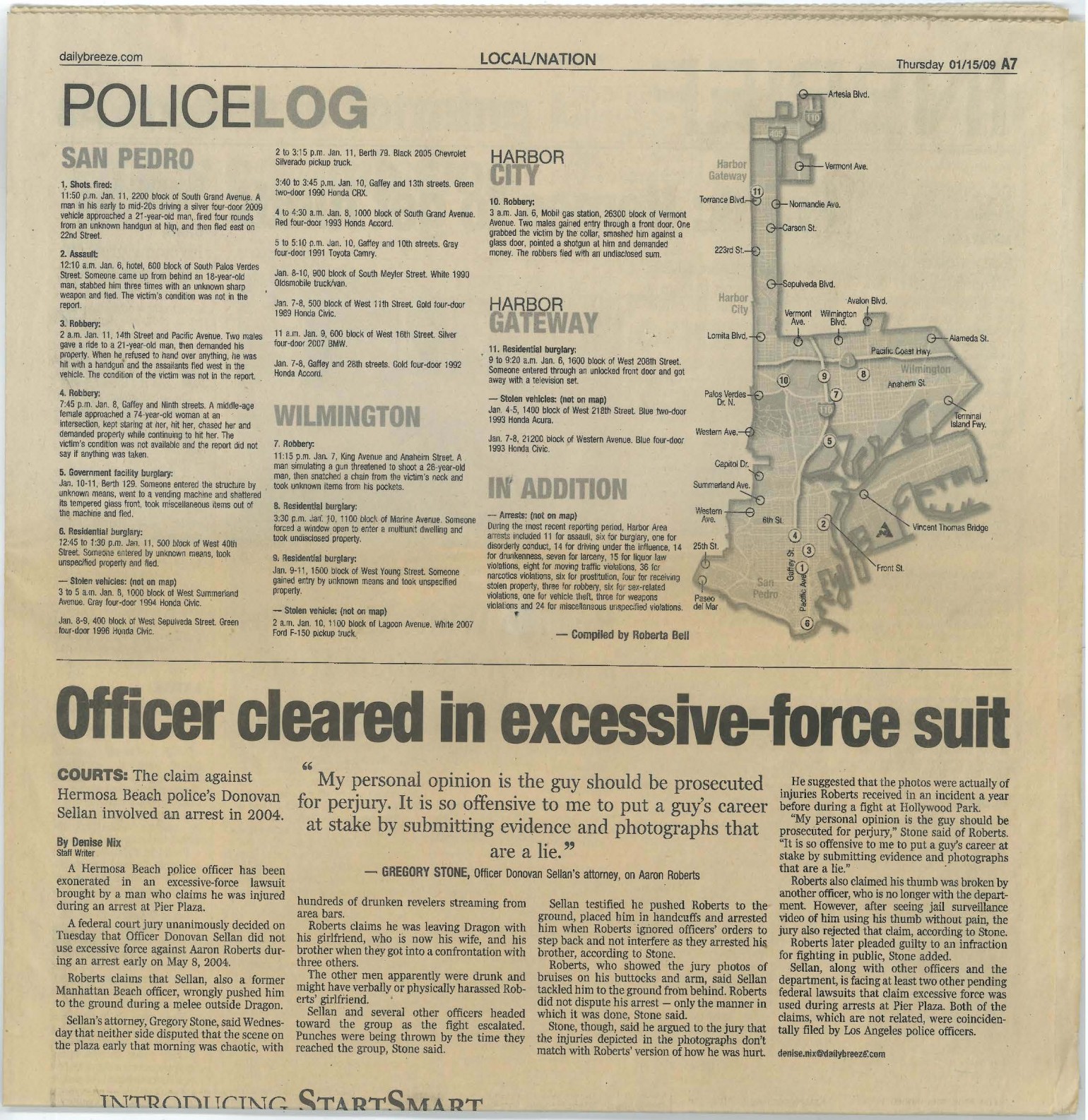 The case was published in the Daily Breeze Newspaper on January 15, 2009. 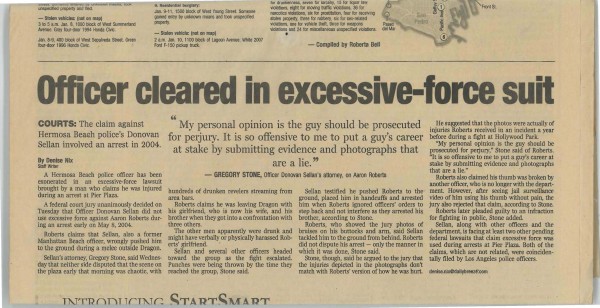 ‘My personal opinion is the guy should be prosecuted for perjury. It is so offensive to me to put a guy’s career at stake by submitting evidence and photographs that are a lie.’

COURTS: The claim against Hermosa Beach police’s Donovan Sellan involved an arrest in 2004.

A Hermosa Beach police officer has been exonerated in an excessive-force lawsuit brought by a man who claims he was injured during an arrest at Pier Plaza.

A federal court jury unanimously decided on Tuesday that Officer Donovan Sellan did not use excessive force against Aaron Roberts during an arrest early on May 8, 2004.

Roberts claims that Sellan, also a former Manhattan Beach officer, wrongly pushed him to the ground during a melee outside Dragon.

Sellan’s attorney, Gregory Stone, said Wednesday that neither side disputed that the scene on the plaza early that morning was chaotic, with hundreds of drunken revelers streaming from area bars.

Roberts claims he was leaving Dragon with his girlfriend, who is now his wife, and his brother when they got into a confrontation with three others.

The other men apparently were drunk and might have verbally or physically harassed Roberts’ girlfriend.

Sellan and several other officers headed toward the group as the fight escalated. Punches were being thrown by the time they reached the group, Stone said.

Sellan testified he pushed Roberts to the ground, placed him in handcuffs and arrested him when Roberts ignored officers’ orders to step back and not interfere as they arrested his brother, according to Stone.

Roberts, who showed the jury photos of bruises on his buttocks and arm, said Sellan tackled him to the ground from behind. Roberts did not dispute his arrest – only the manner in which it was done, Stone said.

Stone, though, said he argued to the jury that the injuries depicted in the photographs don’t match with Roberts’ version of how he was hurt.

He suggested that the photos were actually of injuries Roberts received in an incident a year before during a fight at Hollywood Park.

“My personal opinion is the guy should be prosecuted for perjury,” Stone said of Roberts. “It is so offensive to me to put a guy’s career at stake by submitting evidence and photographs that are a lie.”

Roberts also claimed his thumb was broken by another officer, who is no longer with the department. However, after seeing jail surveillance video of him using his thumb without pain, the jury also rejected that claim, according to Stone. Roberts later pleaded guilty to an infraction for fighting in public, Stone added.

Sellan, along with other officers and the department, is facing at least two other pending federal lawsuits that claim excessive force was used during arrests at Pier Plaza. Both of the claims, which are not related, were coincidentally filed by Los Angeles police officers.