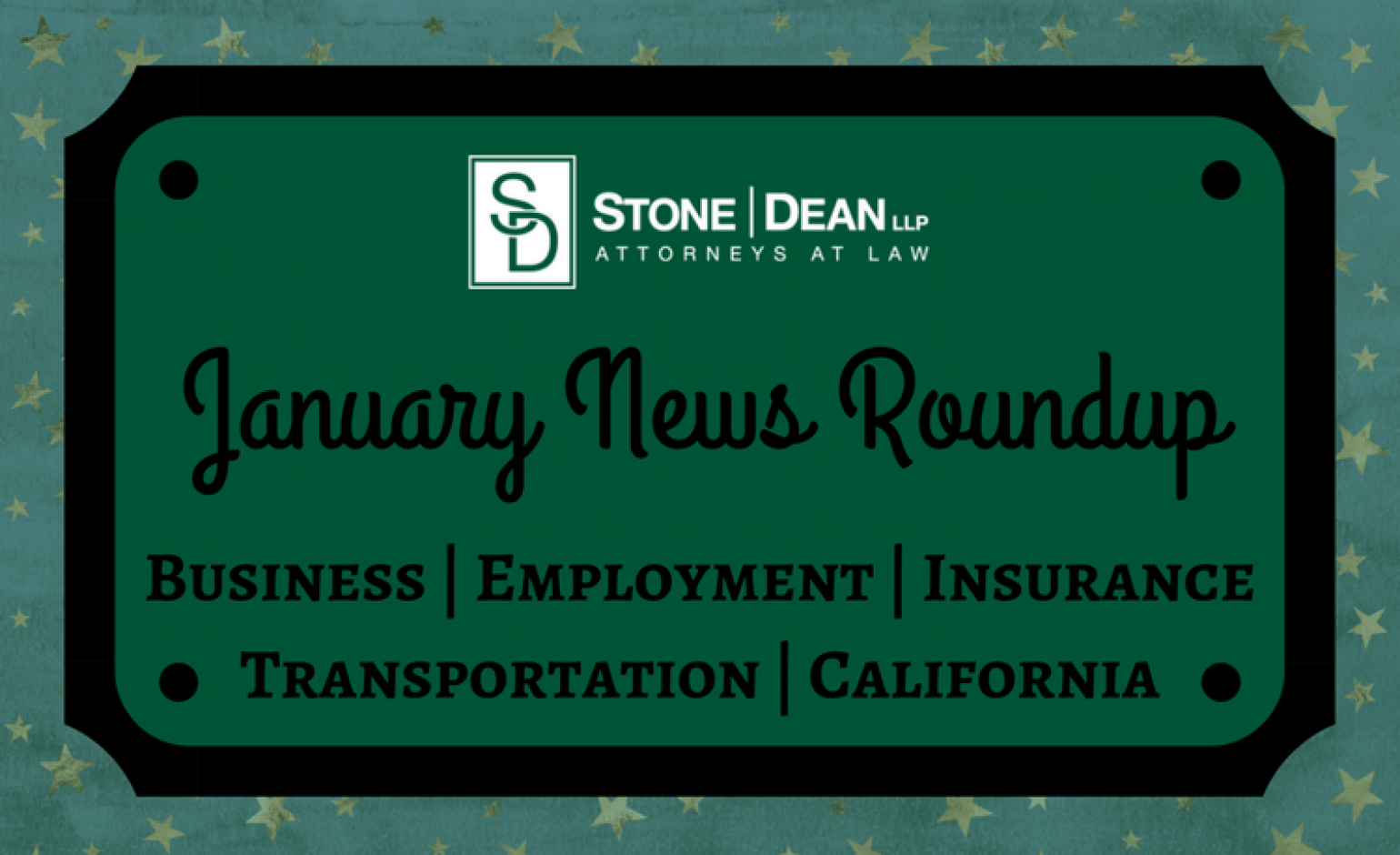 All the best news in California, Business, Employment, Insurance, and Transportation for January, 2018.

“Now lawyers for 35 states, including California, are urging the high court to overturn the physical-presence rule as outdated and unfair to them as well as to the struggling “brick and mortar” retailers who must collect sales taxes.”

“The current process is fundamentally unjust, as it too heavily relies on an accused person’s financial status—rather than flight risk and danger to the public—to determine whether that person goes home or stays in jail.”

“The website will include local, state and federal incentive opportunities available to California businesses.”

“Legislation by De León introduced this month would put the California Public Utilities Commission in charge of creating new net neutrality rules, and give the state’s attorney general the power to enforce them.”

“While the terms of the parties’ mutual agreement haven’t been made public, it happened less than a week after the hotel told the U.S. Patent and Trademark Office that it was abandoning its trademark application.”

“‘We asked the jury what they thought was right and they came to the right conclusion,’ Grumpy Cat’s lawyer David Jonelis, told AFP, adding he believed it was the first time an internet meme had won a victory in court.“

“The problem of using prior pay to set salary is that women make less than men in our society, and so using prior pay institutionalizes gender discrimination,” Finberg says.

“According to his filing, Google employs ‘illegal hiring quotas to fill its desired percentages of women and favored minority candidates, and openly shames managers of business units who fail to meet their  quotas—in the process, openly denigrating male and Caucasian employees as less favored than others.’”

“These laws, aimed at protecting workers from unpredictable and unreasonable working schedules, are becoming more common around the country.”

“Under FEHA, it is unlawful to discriminate against an employee because of a “physical disability.” The plaintiff must first show that she suffered from a disability, could perform the essential duties of the job with or without reasonable accommodations, and was subject to an adverse employment action because of the disability.”

“Musk has confirmed on Twitter that the gun does not meet the Bureau of Alcohol, Tobacco, Firearms and Explosives’ definition of an illegal flamethrower, which means The Boring Company’s model does not emit a flame larger than 10 feet in range.”

“Some Firefox fans are skeptical of the direction Mozilla is heading, and are already vetting new ideas on a Reddit post: ‘Firefox going downhill: What are the alternatives?’”

“A dozen states tied with 10.0 points, while California and Delaware faired worst, tied for the most politicized markets in the country.”

“’We are excited to announce that Cannasure recently finalized the development of a cannabis program that will offer all lines of coverage to medical and recreational business owners,’ said Cannasure CEO Patrick McManamon. ‘Our program is backed by Topa Insurance Group, a leading boutique property-casualty insurer and will provide enhanced and comprehensive coverages.’”

“The electronic devices hold drivers to a more rigid compliance with hours-of-service regulations, which federal regulators and law enforcement officials say is needed to prevent fatigued driving. The Federal Motor Carrier Safety Administration estimates the devices will eliminate 1,844 crashes, prevent 562 injuries and save 26 lives annually. Time will tell if those numbers prove true, but the mandate’s already affecting local businesses.”